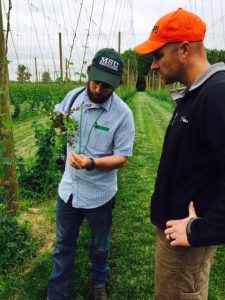 Hop is grown on 1,033 commercial acres in Michigan, making the state the largest producer of hop outside the Pacific Northwest states.  However, the revitalization of Michigan hop production has been challenged by the annual occurrence of the disease hop downy mildew.  The efficacy of disease control strategies is often heavily influenced by environmental conditions and characteristics of downy mildew pathogen populations.  Michigan’s climate is humid and the environmental conditions that favor disease development are likely to persist throughout the entire growing season.  Further, populations of the hop downy mildew pathogen, Peronospora humuli, have been shown to differ in fungicide sensitivity, virulence, sexual reproduction and genetic diversity in various production regions.  I am interested in both the evaluation of current management tools under Michigan conditions and the characterization of Michigan P. humuli populations.  My goal is to help improve Michigan hop production practices and to further the collective understanding of this impactful disease. 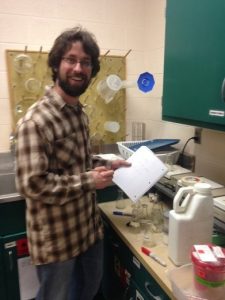 Taking data on an experiment.

Current project: The population structure of cucurbit and hop downy mildews in Michigan.